Every now and then, we will hear about a case that involves matters concerning the upholding of the Syariah or against its implementation here in Malaysia.

Why is that so?

Well, for starters, the so-called Syariah Courts systems here in Malaysia differ severely from what is commanded by Allah the Almighty and enjoined by the Sunnah @ Examples of the Prophet Muhammad Sallallahu Alaihi Wassallam.

This problem is compounded further by the various ways by which each state in Malaysia interprets the Syariah Laws according to their whims or fancies and pick and choose some and leave out the rest.

They do not even agree to the upholding of what Allah the Supreme Creator has decreed and instead play pussyfoot with the Hudud Laws as they please.

Technically, the Shariah Courts are way down at level 5, just bordering above the level of the Subordinate Courts. Not much legal clout if you ask me. 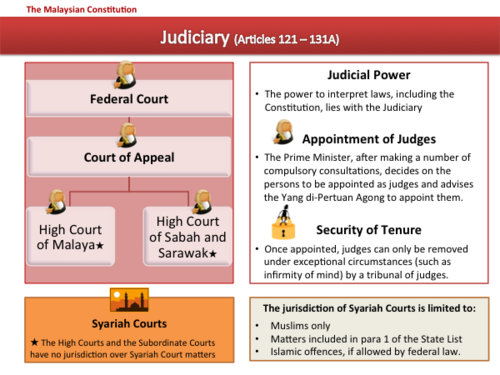 Even then, when it comes to the meting out of justice to Syariah Law offenders, the various Syariah Courts of each state differ from one another and do not have Syariah Court judges with a firm spine and strength of character to see to the implementation of punishments befitting the crimes committed.

As evidenced in the case of Kartika Sari Dewi Syukarnor who was sentenced to be caned by 6 strokes of the Syariah Courts standard rotan, the punishment was scuttled by the decree of the Sultan of Pahang, Sultan Haji Ahmad Shah and changed with doing community service instead.

I was fortunate enough to be able to meet Allahyarham Professor Datuk Dr.Haji Harun Din Al Hafiz way back on the 6th of July, 2010 at his residence, Darussyifa, Bangi, Selangor and video interview him about the Syariah System being opposed by politicians like Karpal Singh and Anwar Ibrahim and the way Syariah Court judgments were not being implemented because the Malay Sultans here in Malaysia were not upholding the Commandments of Allah, God Almighty because they didn’t have it in them to do what’s right.

Isn’t it strange that the Malays of Malaysia choose to remain quiet and look the other way when the true Syariah Laws commanded by Allah the Almighty Himself are overruled by the Malay Sultans and even if said to be implemented are just very watered down puny sentences not worth a glance by true Mukmins who prefer to live under Allah’s Syariah systems instead of manmade laws!

So, we are witnessing a conundrum today where we have all these people objecting to the true implementation of Allah’s actual Syariah Laws and prefer to put up a facade of allowing a very watered down, weakened form of Syariah Laws upon only Muslims.

Just look at how ‘chickenshit’ caning of the Syariah caning is done here in Malaysia! Bonkers!

Compare the above caning method of Malaysia with the right manner of caning being implemented in Acheh, Sumatera, Indonesia.

Then we have so called ‘Muslims’ protesting vehemently against even those very weakened and watered down Syariah punishments in the form of liberal groups like Sisters in Islam, Lawyers for Liberty and paranoid lawyers like Siti Kassim and others.

Couple that with Malay Sultans like the Sultan of Pahang and you have a situation where true Islam can barely breathe and those of us who would love nothing more than to see the real Syariah of Allah be a reality here in our lifetime face a secular Federal Government under a known anti Shariah Prime Minister in the form of Tun Dr.Mahathir Mohamad, Malaysia’s 4th and current 7th Premier.

It’s becoming a real struggle to live life as a proper Muslim in this climate of anti-Syariah and anti-Islamic anything brought about by a disorganised JAKIM [Jabatan Kemajuan Islam Malaysia @ Department of Islamic Development of Malaysia] which has really not done much for better understanding of Islam in this country.

JAKIM really needs to step up its role in explaining about the difference between the Syariah Laws of Allah the Almighty and the more severe form of caning that is carried out under the Civil Laws system.

The caning carried out under the Civil Courts Penal Code System is usually much more severe in its implementation as shown in the video above. This type of caning is usually meted out upon vicious criminal convicts who are found guilty of major crimes such as robbery, rape, drug trafficking, etc.

We need more clearer explanation programs to be carried out by the Islamic Development Department of Malaysia.