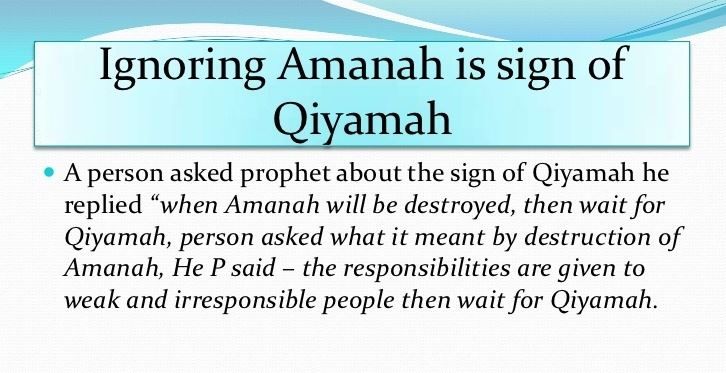 Isn’t it obvious that those ruling over us today are not really too bothered about upholding the Trust @ ‘Amanah’ that is enjoined upon those who are seeking the power and authority to rule a nation?

Over here in Malaysia, the very person who is the Chief Executive Officer of the Federal Government stands accused of misappropriating quite a huge amount of funds that should otherwise be used to prosper the nation.

The way certain key figures who were starting investigations into the matter were unceremoniously removed from their positions and yes men appointed as their replacements. Lately we saw, a ruling Menteri Besar who had done no grievous wrong be pressured to resign and was replaced with one who has no track record of being useful in the progress and development of the state in concern.

Amanah @ Trust is so missing from our country today. An obvious Sign of these End Times. The Prophet told us that in the days preceding Doomsday, we wll be ruled by those who are amongst the worst from the people.

That prophecy of Khatamun Nabiyyi, Muhammad Sal Mustafa, Sallallahu Alaihi Wassallam has come to pass. Be prepared to survive on our own. Trust not those who will not even blink in sacrificing us just to protect their interests.

Each of us need to be self-sufficient and take care of our needs and wants by ourselves.