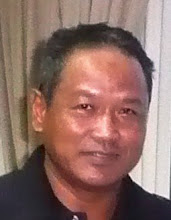 http://hak55.blogspot.com/2011/11/market-talk-what-some-people-talk-about.html
Sometimes, on Saturdays, I accompany my wife to go to the wet market at Section 16 in Shah Alam and I will have my breakfast besides reading the newspapers whist waiting for her to complete her weekly marketing.
Normally, my wife joins me for breakfast before we leave for home, like this morning. There are many different types of food to choose from; nasi lemak, rati canai, lontong, mee rebus, goreng pisang,assorted kuehs, etc. They are not just good, they are also quite cheap. Drinks, either hot or cold, are available at less than the price of the same items at mamak eating shops. On certain days, there’s also entertainment kara – o – ke style with the resident DJ singing the songs, mostly very popular 60s Pop Yeh Yeh Malay songs and once a while you will have same courageous members of the public singing too. I sometimes sing too,  English and Malay classic rock songs of the 70s and the 80s, when my wife is not nearby.

Last Saturday morning at the market, whilst having breakfast, I overhead a discussion about history between two very senior citizens who were seated next to me, both waiting for their wives doing their marketing, I believe. I listened to their conversations and found the discussion very interesting and I could relate to what they both were talking about. One of them said that he is disappointed that students now are not taught the real history but what they are taught is actually ‘alam manusia’(humanities). He said that anyone aged 50 or below are not learning the right things as far as history is concerned and hopes that this is corrected soon.

“Facts are distorted and nobody bothers to check on their accuracy,” according to him. From the way he talks, he must have been a teacher before.

He commented on Sir Stamford Raffles whom he thought was a visionary besides being a statesman and a scientist (botanist) who has a flower, the very smelly Rafflesia, named after him and continued to say that he was also responsible for the commercialisation of rubber in Singapore and Malaya and had developed the Port of Singapore as an important entreport.

“Who do you think was the first person who romanised the Malay language?” he asked his friend. After waiting for a few minutes without receiving any answer from his friend, he said: “It was R J Wilkinson (I thought it was Winstedt?) and not Zaaba like many thought. His friend just smiled at that.

Further, he thought that it is a shame that the government needed to bring in teachers from the USA to teach our students English. He said, “I am sure there are many excellent English writers and speakers in the country and if the government really tries, I am sure many will come forward to volunteer their services. They may be old but they are still very useful”. He fears that some of the foreign teachers that the government brings in may be either CIA or KGB agents, spies like what you see in James Bond movies.

“Do you know that Malays was controlled by the communist for 14 days?”
he asked.

Seated on the same table with me was another senior citizen and his young son and after exchanging the normal greetings, he began to lament about the lack of discipline of people, especially young people today, and began his comments by saying that many like to throw rubbish indiscriminately; from inside the car to the roads they are driving on, into rivers and drains, for example, and everywhere else.

“How can we ever keep our rivers clean?” he commented.

“Just look at this market, it’s dirty with rubbish strewn everywhere,
this is typical Malaysia,” he said.

He said, “I am sure they are taught cleanliness and not to litter indiscriminately at home by their parents, at school by their teachers and at work by their peers but still they litter”.

He said he has a nephew who works with one of the bigger government agencies in the country who, according to him, is corrupt. They come to work at 8:00 a.m. and by 8.30 am they haven’t even started working and when they do after that, by 9:30, they go missing again to have their almost two-hour morning coffee break and nobody bothers, because their bosses also do that.  At 4:00 p.m. they go missing again and this time for their tea break and by the time they get back to their
respective counters, it’s almost the end of the working day already.

“Like that, how can they serve the public efficiently?” he asked.

When confronted about his corrupt practices, his nephew told him that all the others do it and if he didn’t do the same, he will be ostracised by his colleagues. Peer pressure, it seems.

A young man joined us after over hearing our conversation and gave his take on the situation of Malaysian cars to day. Commenting on the new Perodua Myvi car models he asked, “Are these cars safe to drive?”

“Just look into the engine compartment, there’s no reinforcement at all, if one is to crash head on, it’s finished!” he says. We just smiled and left after that.

“My friend just bought one, the SE 1.5 twin cam model and he had a workshop installed reinforcement bars at a cost of RM600 to make sure that the car is safe to drive,” he told us.

“I know they want to make a lot of profits, but definitely they should
not do that at our expense!” he grumbled.

“Don’t they ever crash-test those cars?” he asked.

Suddenly, my wife appeared from nowhere and sat next to me and the conversations stopped abruptly. She ordered a bowl of mee rebus and teh – o and as soon as she finished her breakfast, we left for home and had me thinking about the things common people say every day.