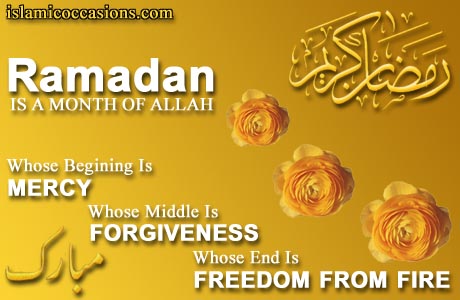 May Peace, Mercy and Blessings of Allah be upon you O Muslims of the world!

We are blessed once again to be in the fold of Ramadhan al Mubarak. The Sacred holy month of fasting, ibadah and redemption. We never know whether we will be fortunate enough to live to the next? Thus, it is important for those of us who understand the tremendous opportunity given to us here by Our Supreme Creator, Master of the entire universes, Lord of all there is to make the best of this month. We get a chance to redeem ourselves in His Eyes. We get to repent and get blessed ; be able to reformat our entire self.

Question is whether we know how to go about it?

Ramadhan is not a month where we just fast, not eating or drinking. No, it is more than that. It is a month where the Blessed Prophet Muhammad Sallalahu Alaihi Wassallam received the Final Testament of Allahu Ta’ala in the form of the revealed Words of Allah. Al Qur’anul Kareem.

The Complete Guidance for Believers comprised of the entire mankind. It is the ultimate guide for those of us who choose to believe. It makes no difference to be in the possession of those without faith. Those who refuse to accept that ‘There is no other God but Allah and that Muhammad ibni Abdullah is His Final Messenger to all mankind!’.

It is true that there is freedom of choice in faith. Yet it would be foolish to imagine that faith would come naturally for any of us. Faith is attained by effort. If we do not make a serious effort to learn about what Islam is and what it is not, then we expose ourselves to the dangers of illusional faith.

By that, I mean to clarify that to this day and date, there has come to be various forms of misinterpretations of Islam. Let’s go to the beginning of mankind.

We all believe that Our Father, the Prophet Adam Alaihis Salam was the First Man. He was created from earth which was taken from all parts of the world by Sayyidina Izra’il Alaihis Salam, the only Malaikat @ Angel of Allah Subhanahu Wa Ta’ala who succeeded in getting such earth whereas all other Malaikats failed in their given mission to do so by Allahu Rabbi.

As a reward for his success, Sayyidina Izra’il Alaihis Salam was given the ultimate job or task of being the Malaikatul Maut @ The Angel of Death. Not an easy task but befitting Sayyidina Izra’il’s stature as being one of Allah’s mightiest Malaikat’s. His attributes are explained so very clearly in one of the tazkirah’s of the learned ulamak of Malaysia, Al Fadhil Professor Dato Dr Hj Harun Din Al Hafiz,  in one of his religious lectures available on cassette with the title ‘Al Israk Wal Mikraj’. I recommend those of you who wish to enrich your ‘Ilm of Al-Islam to seek for it at your preferred Islamic audio and video centre.

Prophet Adam was personally taught by Allah Azza Wa Jalla and given all kinds of knowledge pertaining to his role as the origin of Mankind. He was taught to learn the faith of Al-Islam which starts with the important aspect of the bedrock of faith ~ Tawheed.

Tawheed means ‘The Oneness of God’. I strongly suggest that you visit Allaahuakbar.Net and read the chapter or article on the subject. Islam is the first ever and only faith directly revealed and taught to our Father the blessed Prophet Adam Alaihis Salam in the matter of worshiping only Allah the Almighty!

It would be preposterous to assume that there is any other god or deity worthy of worship other than Allah Subhanahu Wa Ta’ala Himself!

What basis is there for anyone to assume that there would be room for mankind to go worship any other? That’s the reason why at the very beginning of this article, I implied that the greeting of peace, mercy and blessings is meant only for those of you who are Muslims. Believers. Period.

Kaffirs @ Disbelievers are destined for the Hellfire. Period. As far as I have learned, there is no provision for anyone who doesn’t believe in Allah to be spared from the Hellfire. There are no if’s or but’s about the subject. Anyone who tells you otherwise is pulling a fast one on you. Believe me.

You either choose to believe in Allah or you don’t. There’s no fifty-fifty thingy here. You are either a Muslim or you are a Kaffir. There’s no room for in between’s.

Be wise. Be Muslim.

You have only only one chance to do that whilst you are still alive? You wanna take a risk by remaining as a Kaffir, then it’s your call. There is no compulsion in becoming a Muslim. We can just encourage and invite you. The choice is yours. We can lead a horse to the water but we can’t force it to drink! Same situation here as far as the matter of belief or faith is concerned?

Living in these End Times @ Akhirul Zaman has its plus and minuses. Plus in the sense that here we are having the luxury of getting all kinds of stored information in the archives of the Internet at just a click of the keyboard button.

Yet there are many who squander this golden chance by looking for useless and destructive materials online. Instead of enriching themselves with the treasures of knowledge, they waste away the precious remaining moments of their miserable lives with things or pursuits that do not really matter?

We are what we read and learn about?

What we read, what we see and what we come to understand makes up our being. We self consciously program ourselves by feeding in information and data that we glean from books, internet websites, listen to and follow lectures, forums and debates whether online or in real life?

Are you not aware that we are all living in borrowed Time?

Have you not read the news and seen the reports published of so and so suddenly meeting his or her supposedly untimely death?

There is nothing untimely about death. Each of us will die at a specific second very soon based upon the Taqdeer @ Fate that Allah the Almighty Has Set for us. Period!

Not a second too soon or a moment too late. Some might even get a second chance in life by going through surgical procedures, etc to prolong their so called life but in the end, it is Allah Who Decides!

Ramadhan al Mubarak is a month not to be wasted by idle pursuits or by thinking that because one has fasted and abstained from all acts that nullify it will get rewarded big time in the Akhirat?

Excuse me. There’s just no such guarantee.

Fasting has to be done with faith and sincerity. Not because you want to show off that you are one kick ass Muslim or Muslimah. No sirree.

There are certain rules and regulations that come along with the ibadah. You have to keep to the do’s and stay away from the don’ts. This one article can’t cover the subject so please do your part and read up about it in the internet by searching for the right and relevant stuff about Ramadhan. Insya Allah you will find oceans of knowledge and information about it online. For a start, click here!

Please learn to differentiate between what are cultures originating from each country’s form of practice in the month of Ramadhan and what are the true fundamentals concerning it according to the true teachings of Islam originating from the Sunnah of the Blessed Final Messenger of Allah, Prophet Muhammad Sallalahu Alaihi Wassallam?

God Willing, I will share with you what I myself have come to learn about it either through this website or over at my own blog.

May Allah bless and guide us all.