I. The Importance of Language in Connection with Mind and Religion

It was reported that Peter Lombard’s Four Books of Sentences recorded the following concern of Jerome, on “heresy arises from words wrongly used”.

Those remarks by St Jerome of Stridonium (d.420), who was regarded as the most learned of the Latin Fathers, clearly reflected how paramount the importance of language was for him, particularly in relation to theological matters.

The fact is, that there is a profound connection between language and reason, as words and term connote what is conceptualized or understood by the mind.

Because using language correctly is a cognitive action, it is imperative for its users to be meticulous in its “correct usage” as well as in the pursuit of its “authentic meaning.”

As far as fundamental religious matters are concerned, to use language incorrectly introduces confusion to the mind of its users. Words wrongly used will inevitably impinge upon semantic change in theological concepts and the way one views reality and truth.

In the Christian context, it is in order to avoid such heresy arising from the erroneous use of words and terms that St Thomas Aquinas (d.1274) said this in his Summa Theologica: “when we speak of the trinity we must proceed with care”.

As if anticipating detractors who would argue that the quest for the right words in divine matters is “toilsome”, Aquinas insisted that it was well worth the effort. St Augustine (d.430), who was arguably the most important Christian thinker after St Paul, said that in comparison to the wrong usage in theology, “nowhere is error more harmful.”

Likewise, Aquinas advised Christians to avoid the term the “only” God, as the adjective “only” (Latin unici) would take away their notion of the number of Divine Persons. In Aquinas’s words, “We do not say ‘the only God,’ for Deity is common to many”: referring to their belief that deity is common to the co-eternal Persons: the Father, the only-begotten Son, the Holy Ghost.

III. Translation of the Triune God using the term Allah: A Case of A Word Wrongly Used

Naturally, I find that there are many contradictions between what was advised by Aquinas, who was the foremost Western theologian of the Church, with the concerns of a few Malaysian Christian leaders recently highlighted in our media. While Aquinas advised his coreligionist to exclude from God the idea of “singularity” or “uniqueness”, a few Christians in Malaysia (or in any country for that matter) insist on translating their notion of a triune God by using the term ‘Allah’.

But there a fundamental issues that they have to address first without confusing themselves and creating linguistic anarchy, because among the firmly integral purports of the term Allah are al-Ahad (the Absolute One), al-Wahid (the Absolute Unique) and al-Witr (the Absolute Singular, the Unequalled) Who has no son, nor father, nor partner, nor likeness.

These purports have been mentioned by way of describing who Allah is in the Qur’an as well as in its interpretation by the authentic traditions of the Prophet Muhammad, who is, for that matter, considered by experts as the most eloquent of the Arabs.

In order for us to see how those worldviews are contrasted to each other, and hence to be careful in our translation, it is sufficient to compare the abovementioned statement on God by Aquinas with the following.

Commenting on the meaning of al-Wahid al-Ahad, Muhyiddin Ibn al-‘Arabi (d.1240) had simply this to say in his Futuhat Makkiyyah: “Allah is Unique, the Absolute One with respect to His godhead, there is no God (Ilah) except He.”

As far as the authentic meaning and correct usage of the term Allah throughout the ages are concerned, the Tahdhib of al-Azhari (d.980) and the Lisan al-‘Arab of Ibn Manzur (d.1311) have documented that, excepting Allah, there is no being to whom the purports of al-Wahid and al-Ahad are applicable together, or to whom al-Ahad is applicapble alone. ”Verily,I,-I alone-am Allah: there is no God (Ilah) but I: therefore worship Me” (the Qur’an, Ta Ha, 20:14).

V. Allãh is a Proper Name; God is a Common Name

That is why the term Allah is a proper name which is never shared by others throughout the history of language. The term Allah is not “communicable both in reality and in opinion”, if we want to use Aquinas’s technical terminology.

On the contrary, such terms as Ilah (God in Arabic), Tuhan (God in Malay) or God (in English) are communicable, and have indeed been used to others. Earlier, we have noted Aquinas’s assertion that the term God is common to the three Summa Theologica which explains the statement an eastern theological doctor of the Greek and Latin Churches.

VI. Allãh is a Proper Noun; God is an appellative Noun

Marshalling his argument on that premise, Aquinas concluded that the name God in this context is not a proper noun. On the contrary, it is an appellative noun, or a title, for it signifies the divine nature in the possessor, either in the sense that He is the “Cherisher”, the “Taker of account of everything”, or the “Comprehender of everything”, and so on.

VII. Allãh Has No Plural; God’s Plural is Gods

Aquinas also corroborated his significant conclusion by the fact that the term God has plural (Gods), as in the Biblical text “God presides in heavenly council; in the assembly of the Gods he gives his decision… I have said, You are Gods” (Psalms 82.1,6).

Here, the argument on the right to translate a common noun God using the proper noun Allah crumbles; it is only correct to translate God using Tuhan. As far as the proper noun Allah is concerned, it has absolutely no plural, reflecting the notion on the One and Only God whose Essence absolutely excludes the purport of consisting of three distinct co-eternal persons, whether in the imagination, in actuality, or in supposition.

VIII. The Proper Noun Allãh Neither Belongs to Any National Language Nor a Derivative

Furthermore, the fact that it is a proper noun alone renders erroneous the critical assumption that the term Allah belongs to a notion language and is an Arabic derivative. Indeed, for those who care enough to check the truth, such an absurd claim has long been debunked as inconsistent with the rules of the Arabic language itself by authorities like Ibn al-Barri, a-Layth and al-Khalil (d.160/777) in his Kitab al-‘Ayn.

Al-Zabidi, in his Taj al-‘Arus, remarked that “the most sound view on the name Allah is that it is a proper noun given by the Essence, the Necessary Being. The name Allah combines the attributes of Perfection altogether, it is a non-derivative word.”

Then, al-Zabidi (d.1790) quotes he authority of Ibn al’Arabi (d.1240), who stated that “the term Allah is a proper name denoting the real and true God (al-Ilah al-Haqq), a denotion that comprises all the Unique most beautiful Divine Names.”

Last but far least on the “correct usage” and “authentic meaning” of the term Allah, al-Tahanawi (d.1745), in his dictionary of the technical terms relating to metaphysics, the Kashshaf Istilahat al-Funun, stated that “it is inspired to His servants that the real name Allah is a proper name of the Essence… The verifiers (al-Muhaqqiqun) holds that the name Allah is a non-derivative word; indeed, it is an extemporized proper name (ism murtajal) as it can be described but does not describe.” 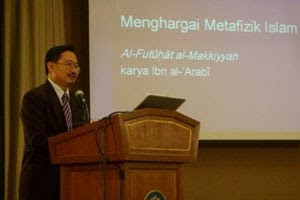