This is a heartfelt sharing of thoughts by Cikgu Aliya Yeoh who blogs at Musings of a Mualaf. 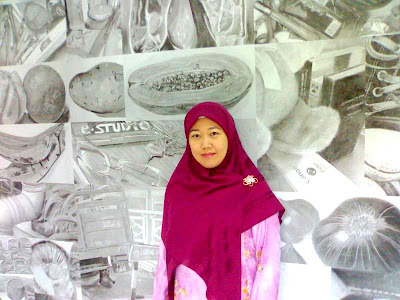 Cikgu Aliya is a member of The Muslim Bloggers Alliance and her writings have always been a source of pleasure, knowledge and a window into the heart and soul of a committed and dedicated revert to Islam.

She is an excellent writer and brilliant storyteller. I find her writings so alive and full of passion for Islam, life and everything that’s precious and beautiful!

To me, Cikgu Aliya is not only a good friend online but also a shining example of a true Muslimah whom Allah Subhanahu Wa Ta’ala has blessed with the best of Iman, akhlak and wisdom in helping to mould the hearts and minds of her students to be exemplary citizens of Malaysia.

Cikgu Aliya just graduated from USM! Congratulations Cikgu! All my best wishes to you and pray that you will continue to excel in your noble career as an educator! Ameen.

Okay, let’s get to the main article by Cikgu Aliya which I am featuring here today.

It’s an important insight into how Cikgu Aliya, as a Mualaf @ Revert to Islam views the report in The Star about the findings of SUHAKAM concerning their ‘studies’ on issues cropping out of marriages that involve husbands or wives who convert /revert to Islam and the implications arising out of such cases?

Cikgu Aliya’s comments are in green.

Suhakam has completed its study on issues arising from inter-faith marriages and one spouse changing his religion and will be submitting a report to the Prime Minister’s Department soon.

Among the proposals Suhakam had come up with was for those who planned to embrace Islam to marry a Muslim to study the religion in depth before their conversion, said Commissioner Datuk Dr Abdul Monir Yaacob.

(Right. Those who intend to embrace Islam should know that it’s a one way road. That should be done accordingly and from the right people; namely PERKIM, MACMA, JIM, ABIM etc. Local Islamic Religious departments? Nahhhh…

And study the religion in depth? How much is enough? Isn’t the 1-month mandatory lessons about Islam & Fardu Ain organised by the Islamic Religious Departments enough for a start?

BTW, not everyone who want to embrace Islam intend to marry a Muslim laa Datuk.. many of us are happy to be Muslim/Muslimah on our own accord.

No need to find a husband/wife to become a Muslim. It’s the 21st century, grow up la Datuk!!!)

He added that family members should also be informed when a non-Muslim wants to embrace Islam so as to avoid problems later in relation to funeral rites or distribution of property after the person’s death.

(Yeah right… Which family in their right mind will simply accept their son/daughter/husband/wife to leave the comfort zone of one’s original religion and embrace another religion? They’d fight tooth and nail to stop the conversion from ever taking place.

Perhaps it’s wiser to suggest making it mandatory to inform the family members within 3 months after the person’s reversion to Islam.

That should give ample time for the unmarried new revert to prepare for the confrontation with family members and for the married spouse to move to another residence.

The officers in charge at the local Islamic religious departments should be responsible for that – post the letter, call up, etc- and not just buat tak apa until a revert dies 😛

“We feel that it is appropriate for non-Muslims to distribute their property, if any, to their close relatives before they convert to Islam, said Dr Abdul Monir yesterday.

(Hello.. who gives Suhakam the right to determine how a person spend his/her property?

It’s an infringement of a person’s right.

What if the person has no intention to distribute any of his/her hard-earned properties to any of his relatives because they don’t deserve it – are drunkards or gamblers?

Does that mean he/she will not be allowed to revert to Islam? Pahhhhh!!!

If this is to be applied, same should be done to those Muslims who intend to leave Islam for other religions so that the rights of those parents of murtad will be protected!

Also why should only the rights of the non-Muslim spouse be protected?

What about the rights of the Muslim spouse?

There are wives who want to embrace Islam but are prevented due to the present law that states only Muslim husbands can divorce their wives.

That leaves wives who become Muslimahs and still married to non-Muslims in a dilemma because they can’t divorce their husband nor ask for a divorce at the civil court.

I am one of the lucky few who manage to free myself (by getting a mutual divorce first without informing my ex about my intention to revert to Islam after the divorce) and pursue my dreams. What about the others?

There are husbands who want to embrace Islam but think many times due to the fact that their wives refuse to a divorce nor become Muslimahs along with the husband.

There are husbands who due to their wives’ refusal to convert to Islam, have resorted to marrying another Muslim wife to share his life with, and like any good fathers, want their children to be brought up as Muslim children.

The rights of every citizen should be protected, Muslims and non-Muslims)

Property gained after conversion to Islam would be governed by Islamic law, he added at a dialogue here.

(Of course. That’s faraid. As a born-Muslim surely you know more than I do about Islamic law, Datuk ???)

If you are a Muslim, you are bound by Islam to help anyone who sincerely intends to embrace Islam.

People who intend to revert to Islam should be helped, not prevented or discouraged by man-made laws designed to stop anyone from furthering their intention.

If I had told my family members and my former husband about my intention to embrace Islam, they will do everything to stop me. I tried to and had to wait 10 years.

If I had distributed my properties to close relatives before I embrace Islam, life would be more difficult for me as zakat is not automatically given to new reverts.

In short, people who intend to embrace Islam should be studied on case-to-case level, not simply by accepting proposals from those who have never undergone the hardships of becoming a Muslim or who are already against the reversion of non-Muslims to Islam.

If those who revert to Islam are married to non-Muslims, they should be required to settle their divorce amicably, with the Muslim husband following the Islamic rules of providing nafkah etc and the Muslim wife granted a quick divorce but without nafkah.

That should prevent husbands and wives who want to escape from responsibility.

Better still, get a divorce before embracing Islam officially.

The proposals by Suhakam is an insult to Islam and the Syariah Court. I wonder if Muslim NGOs are consulted.

Well, that is what Cikgu Aliya feels about the subject matter?

I figure that the authorities especially the Islamic Development Department @ JAKIM, ought to seriously handle this obviously sensitive but very important matter involving the future and lives of so many people and families from both sides of the faith.

It is also a serious matter of concern to all those affected by the consequences of our fellow Malaysians from other faiths who out of their own convictions and search for their inner peace of mind and realizing the Truth of Islam decide to embrace the faith and claim their birthright to be a Muslim.

No doubt that no one has the right to stop anyone else from embracing Islam for it is a fitrah for mankind but that should not also be abused by those who embrace Islam for economic reasons or as a way out of a problematic Non Muslim marriage?

I believe that only with proper handling of this very real and quite sensitive matter by dedicated, learned and compassionate Islamic Authority officers who are sincere in seeking the amicable solution to this ultra sensitive, touchy subject will be able to deal with those who are affected by the decision of the former Non Muslims to embrace Islam, in an appropriate and acceptable manner that all who are concerned can come to accept?

I acknowledge that the cases we have here are real and must be solved amicably through the Shariah Courts based upon what Allah Subhanahu Wa Ta’ala commands and His Final Messenger has enjoined!

Failure to do that will only see this problem be an endless source of headaches and a bone of contention that remains stuck in every Malaysian’s throat so to speak?

Let’s hope that JAKIM gets down to solving the problems faced by both the Mualaf and his or her Non Muslim family once and for all!

My sincere appreciation to Cikgu Aliya for her contribution to the Muslim Bloggers Alliance and consent to have this article republished here for the benefit of all our fellow Malaysians to read and ponder as to the situation many reverts to Islam here in Malaysia, face, day in day out?